Following the Local Government Act of 1894 the first parish councillors were elected at a Parish Meeting on 4th December 1894 in the Mission Hall, Newtown. There were seven councillors, three from Newtown, two from Yeovil Marsh and one each from Camborne Grove and Brickyard. As the title describes the parish encircled the town of Yeovil, but gradually parts have been taken into the Town.

Elections were by nomination and a show of hands at the Annual Meeting. It was not until the 1945 Act that elections, as we know them today, could take place. In Yeovil Without the first such election took place on 8th May 1952 with polling stations at Westfield Baptist Hall, Stiby Road, Yeovil School, and Mudford Road. There were nine councillors, today there are 15 with the parish divided into four wards, Brimsmore, Combe, Summerlands, and Lyde. The Annual Parish Meeting remains and is mandatory, to be held in March or April when the council reports on the year’s work and parishioners can question or raise matters of concern. This is not to be confused with the Annual Parish Council Meeting to be held in May when officers and representatives are named.

The 1894 Act also gave parish councils the power to acquire land for allotments. The theory was to improve the lot of labourers, after living in poor housing with no garden, and to raise their standing in the parish. These were not just for plants, livestock were allowed. There were several in the parish and these increased during the two great wars. Now only one remains at Yeovil Marsh.

Over the years we have had several mortgages, twice to pay towards extending the Yeovil cemetery, which is why we are represented on the management committee. Others to raise money to pay for street lighting as the demand increased. Finally, in 1972 the money was needed to equip the play area within Johnson Park. This was completely refurbished using parish funds and a grant from South Somerset District Council.

Since 1902 the parish has been involved with the management of Woburn Almshouse in Bond Street. This still exists and has recently been modernised into very pleasant flats. In 1913 the John Nowes Charity is first mentioned. It still exists with one councillor representative and also the Yeovil United Charities.

In 1942 a letter from the Yeovil Rural District Council raised the matter of post war housing and the council felt there was a need for at least six houses for agricultural workers in Yeovil Marsh. Records mention a row of houses at Coppitts Hill. In 1952 eight houses were built at Yeovil Marsh and at the Annual Meeting named Poplars Close. 1953 three populas obtusata trees from Scotts nurseries were planted at the entrance and in 1954 bungalows for the elderly were mentioned. In 1952 notice was given of the building of 60 houses at Larkhill for Westland workers.

In 1927 the council agreed to pay for refuse collection, three weekly, from houses along Preston, Larkhill and Ilchester Roads, also Combe Street Lane. From early 1930 there were discussions about the supply of water to houses and 1939 the sewering of land and houses in Combe Street Lane.

1952 Rural District Councillor Minty paid for a rest shelter, now called the bus shelter, at Hundredstone for the benefit of people, especially children waiting in the rain.

Throughout the parish council responded to requests as public perception of the quality of life increased. It is still doing so. The complaints continue and are often the same and in the same places over the last 100 years.

Oak Tree at Yeovil Marsh in the Parish of Yeovil Without 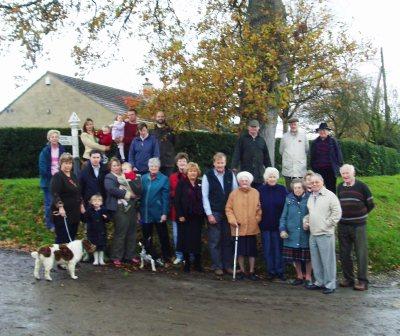 At the junction of Marsh Lane and the road through the hamlet of Yeovil Marsh stands an oak tree planted to commemorate the coronation of King Edward VII in 1902. Yeovil Without Parish Council are working towards having a tree preservation order put on this oak tree for future generations to enjoy.

The photograph of the planting of the oak tree in 1902 was taken by a relative of Mrs. Mary Snell who with her family, Yeovil Without Parish Council tree wardens Mrs Marie Botham and Adrian Broadhead, Chairman Mrs. Barbara Strong, Clerk Dinah Cheek, Parish Councillors, Reverend Hartree and villagers pose in front of the oak tree as it is today (November 2004).

If you have a matter which you wish to draw to the council's attention you can do so by contacting the clerk by letter, telephone or email using the contact form

This site uses cookies. By continuing to browse the site, you are agreeing to our use of cookies.

We may request cookies to be set on your device. We use cookies to let us know when you visit our websites, how you interact with us, to enrich your user experience, and to customize your relationship with our website.

Click on the different category headings to find out more. You can also change some of your preferences. Note that blocking some types of cookies may impact your experience on our websites and the services we are able to offer.

These cookies are strictly necessary to provide you with services available through our website and to use some of its features.

Because these cookies are strictly necessary to deliver the website, you cannot refuse them without impacting how our site functions. You can block or delete them by changing your browser settings and force blocking all cookies on this website.

These cookies collect information that is used either in aggregate form to help us understand how our website is being used or how effective our marketing campaigns are, or to help us customize our website and application for you in order to enhance your experience.

If you do not want that we track your visist to our site you can disable tracking in your browser here:

We also use different external services like Google Webfonts, Google Maps and external Video providers. Since these providers may collect personal data like your IP address we allow you to block them here. Please be aware that this might heavily reduce the functionality and appearance of our site. Changes will take effect once you reload the page.